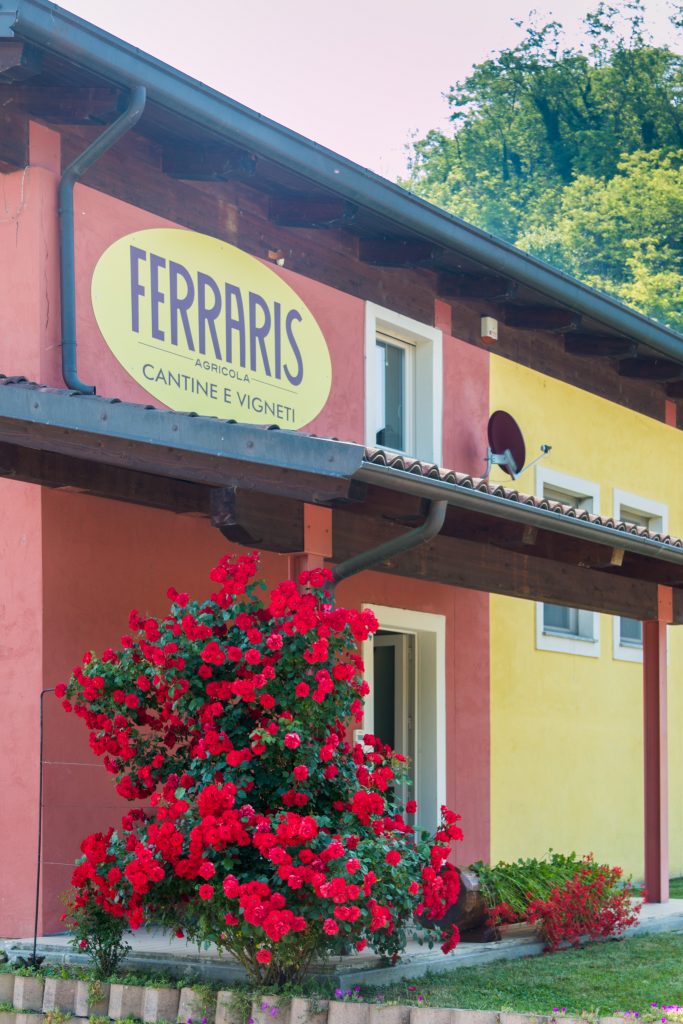 Our cellar is open for visits and tastings. If you want to discover and get to know the Ruchè di Castagnole Monferrato, we will be very happy.

The Ruchè di Castagnole Monferrato DOCG wine is unmistakable in the aromas that it emanates, from the floral scent, the fruity notes that emerge at every taste.

The history of the Ferraris Agricola company began when my great-grandfather Luigi emigrated to America and found gold during the “Golden rush” in California. Thanks to these proceeds, my great-grandmother Teresa, who had remained in Italy, had the opportunity to make your dreams come true. In 1921 he was able, in fact, to buy the house in Via al Castello, where the company was located until recently and where the family’s historic cellars are still located. Two years later, my grandfather Martino bought (with many sacrifices) the “Casot” which was nothing more than a rural farmhouse in the middle of a 40,000 square meter plot where today one of the most representative vineyards of the company stands. My grandfather then planted the vineyards and bought some barrels in order to make his own wine production, which was initially sold wholesale to the merchants of the time, and later in demijohns to private consumers. My grandfather personally took care of the deliveries, which required numerous weekly trips from Castagnole to Turin aboard his horse. After the death of my grandfather Martino, it was my father’s turn who, in a period of strong Turin industrialization, decided to emigrate to the city like many peers of the time. However, he always kept his father’s passion for vineyards alive. He therefore continued to take care of the family vineyards, giving the grapes to the town’s Social Cooperative. All this continued until 1999 when, after my diploma in Agriculture, I settled in the company and thanks to a complete renovation of the old cellar, I was able to start making wine again on my own grapes from the family vineyards. This was a turning point for my company and perhaps for the whole world of Ruchè: I was in fact the first in the area to thin out the grapes to increase their quality and to set up the company exclusively for the production of bottled and high quality wine. level. In addition, I began to travel around Italy and around the world to spread the knowledge of Ruchè and to seek out new markets. Thus, production grew rapidly. It went from 10,000 bottles in the 2000 vintage to 60,000 in 2003, also thanks to the partnership between me and Randall Grahm of the already famous Bonny Doon Vineyard (California). Today the company produces about 180,000 bottles, of which more than a third of Ruchè, extends over 28 hectares of which 21 are planted with vineyards and is the largest family-run farm located in the area of ​​the 7 municipalities of Ruchè.

SIMEI, LEADING EVENT IN TECHNOLOGY FOR WINEMAKING AND BEVERAGE BOTTLING RESCHEDULED, STILL AT FIERA MILANO, FROM 15 TO 18 NOVEMBER 2022 (Milan, 22 January 2021). The 29th edition of SIMEI, the event held by the Unione Italiana Vini(UIV), world leader in technologies for winemaking and bottling, initially scheduled from 16 to 19 November 2021, has been postponed to next year, still at Fiera Milano, but from 15 to 18 November. The postponement and rescheduling of the exhibition are the result of careful reflection and discussions with the association of reference for the sector (Anformape) and with companies in the sector, and are a direct consequence of the health emergency. It is not possible at present to guarantee the usual business quality that has enabled SIMEI to become the international reference event for the sector over the years. Unione Italiana Vini Press office: Simone Velasco (327.9131676 – simovela@ispropress.it), Benny Lonardi (393.4555590 – direzione@ispropress.it) https://www.simei.it

For many years now, global consumption of wine and spirits has been driven by the Asian market. With its positive business environment, Hong Kong has emerged as a key location for networking in the industry and a strategic trading platform.

Best Wine Stars, now in its third edition, is an annual project through which wine culture is promoted and the history and uniqueness of each individual winery is disseminated.

ONLY WINE 2022 The National Exhibition of Young Producers and Small Wineries April 30, May 1-2, 2022 TIMETABLES: Saturday 30 April from 2.30pm to 9.00pm Sunday 1st May from 11:00 to 19:00 Monday 2 May from 10:00 to 17:30 “The vertical and volcanic elegance of Durello Metodo Classico” “Tasting of a selection of the classic method produced from authentic native durella grapes. by Francesco Saverio Russo Wine Blogger and winetaster Info: info@onlywinefestival.it segreteria@ac-company.it

Vinum is a showcase and a great opportunity to taste the greatest wines of Langhe, Roero and Monferrato.

A unique event , the annual VinNatur Tasting 2022 event offers an articulated tasting itinerary to deepen or begin to know natural wines: Among the most important manifestations of natural wines in the world. It brings together European winemakers who have the common goal of sharing the techniques and experiences used to produce wine in a natural way, both in the vineyard and in the cellar, and to spread the culture of the “terroir”. Each visitor will be able to meet and get to know the producers themselves, as well as purchase the wine for tasting directly from them. The event was born, therefore, as a natural result of the growing commitment to spreading a new wine culture. Daily entry ticket 25 € per person Purchasable on site, at the entrance to the event Including tasting glass, map of producers and event catalog No concessions are provided for sector operators, sommeliers and restaurants as the entire proceeds from the event are used for VinNatur research and for charity.

International winemaking excellence meets again at our Alois Lageder Estate in Magrè. The direct dialogue between winegrowers and visitors that takes place in a familiar and peaceful atmosphere still remains the priority of our event. The Casòn Hirschprunn Estate – a 17th century Renaissance palace – and the historic Tòr Löwengang building offer a truly evocative and unique setting. For the 23rd edition of Summa over 100 wine producers from 10 different countries present their wines to an audience of experts, journalists and wine lovers. The event with a sustainable focus reflects the holistic approach of our Estate. Thanks to the collaboration with partners who work in line with our philosophy, we present various gastronomic specialties, made mainly based on seasonal, regional and organic products. https://www.comune.magre.bz.it/it/Summa_degustazione_vino_internazionale

ProWein is the world’s leading trade fair for wines and spirits, the largest industry meeting for professionals from viticulture, production, trade and gastronomy. Every year ProWein provides three days of concentrated business and a highly promising ancillary programme.

YOUR INTERNATIONAL APPOINTMENT WITH LIVE WINE Live Wine fair will be back in 2022 At  Palazzo del Ghiaccio over 150 Italian and international producers working with agricultural methods that respect the soil and the natural vitality of wine come together. A great chance to meet the producers, taste their wines and listen to the stories of their territories. Live Wine is a market-fair, aimed both at the professionals and the general public. The price of the admission ticket includes a signature tasting glass and allows to taste all the wines on show. Upon reservation, you can attend a selection of guided tasting sessions. Meanwhile the whole city will be in a buzz, with the events in wine bars and restaurants across Milan. https://livewine.it/web/?lang=en

VALPOLICELLA: AMARONE  PREVIEW No to Preview Amarone in 2021, yes to the Valpolicella of wine in digital format. It is the choice, dictated by the pandemic, of the Consortium for the protection of Valpolicella wines which has decided to postpone its Preview dedicated to the 2017 vintage to 2022 but at the same time to raise the attention on the territory with a multi-channel online event, scheduled for 26 and 27 February next year, involving producers, institutions, buyers and specialized press at an international level. It starts on Friday 26 February with a focus dedicated to producers on the new wine distribution scenarios in the world and on new choices in terms of marketing and commercial strategies. Afterwards, off to the smart tastings of Amarone, Ripasso and Valpolicella with the press and international buyers. Saturday 27 February, space for the institutional event with the main government representatives of the EU and Italian sectors. In the foreground, national and European policies in support of the markets. It continues with in-depth information on the denomination, a survey on the Valpolicella market, and a focus on climate change. To anticipate the two-day event, Thursday 25 February will also be organized a moment of […]

Our winery is located in Soave DOC and Monti Lessini DOC

the Sancio family leads the farm from which quality DOC wines that represent the best Ligurian tradition come out: Pigato, Vermentino, Rossese and Lumassina are the proposals of Sancio.

Book your tour and wine tasting at Corte Fornaledo

The Velenosi winery was founded in 1984 by the will of two very young entrepreneurs, Angela and Ercole Velenosi. Then with the experience of Dr. Paolo Garbini, Velenosi Srl was established in 2005.

It was 1966 when Domenico Poggiali Fèlsina took the courageous leap and bought the estate at a time when Italian viticultore was struggling. He chose to invest in the quality of the wine and the expertise of a young team. Their passion for wine united with the skills of businessmen, and under their guidance, they injected modernity into their business plan, without however, abandoning the spirit of tradition. In the space of a few years, the vineyards grew to more than forty hectares, and the soul and organization of the company changed, as well. In the second half of the 1970s Giuseppe Mazzocolin entered the family business with the task of commercial development. His studies in the Humanities, his wealth of contacts, his elevated work ethic and his respect for Tuscan and Italian culture constitute the foundation for the growth of the Fèlsina winery, paving the way for the beginnings of their international recognition. Their friendship with Luigi Veronelli and collaboration with oenologist Franco Bernabei shaped a developmental strategy that has proven itself extremely coherent starting with the wines of 1983, the first year of Fontalloro and of Rancia, up to the present day. With Domenico and Giuseppe Poggiali at the helm, an extraordinary development began which, since 1990, also includes Giovanni […]

The Mastroberardino family has lived in the socio-cultural context of wine for over two centuries, based on the most reliable historical reconstructions.

Organization and accompaniment of a wine tour

Ruffino is one the most ancient winery in Tuscany. Ilario and Leopoldo Ruffino were twi cousing with the dream to make the best Chianti in the area. Since 1877 the Chianti Ruffino is well know all around the word and it is a synonimous of quality and tradition